Well Exception is very popular topic in any java , j2ee interview and definitely you will faced at least 2 questions on this topic. I am going to list top 20 frequently asked questions on exception and mostly started with the words like "Have you used exception in your code"?

4. What is difference between extending Exception and extending RuntimeException?
Interviewer sometimes ask you this question instead of What is difference between Checked and Unchecked Exception, to make you confused. This question is also popular as HashMap vs Hashtable
To answer correctly of this question, you need to understand what is exception and how many types of exception, so I suggest you to read about exception from Exception Tutorial. 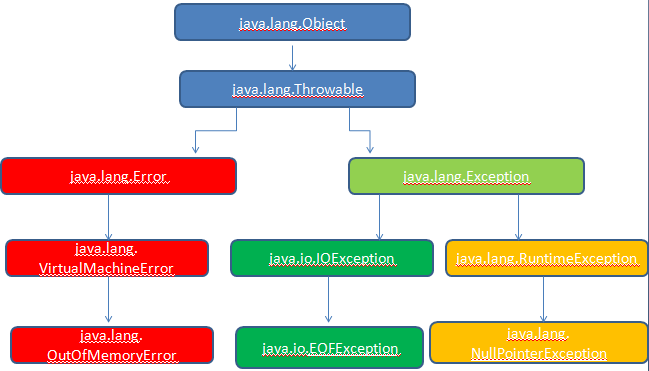 6. List the Exception Handling keywords
This question's popularity is equal to list the methods of java.lang.Object class. Well five exception handling keywords and those are listed below -
7. What is difference between Error and Exception?
One of my favorite exception handling interview questions like ArrayList vs LinkedList, Errors and Exceptions both are sub-classes of java.lang.Throwable.
Errors - An errors are also known as Unchecked exceptions and it occurs at runtime. Errors are indication of serious problems, and from errors your application cannot be recovered, so never try to handle it or throws it.
One example of Error is,
VirtualMachineError- Thrown of this error indicates that, virtual machine is crashed/broken or resource is not available for java virtual machine, and it'll caused any of these errors -
Exception - An exception is also known as Checked Exception. It occurs at compile time and it's a programmer’s responsibly to handle it or throws it otherwise program will not compile successfully.
Checked Exception examples, FileNotFoundException,DataFormatException,TimeoutException etc.

8. What is try with resources
The try with resources is a statement, which declares one or more close able resources. That closeable resources must be automatically closed after the program finished with this execution.
Any object that implements java.lang.AutoCloseable, which includes all objects which implement java.io.Closeable, can be used as a closeable resource.
Below is the syntax of try-with-resources statement.
Now, BufferdReader will automatically closed after completion of tryWithResources method, this feature was introduced in JDK-7 you can read more about jdk 7 new features.

10. What will be the output of this program?

11. Is it possible to use multiple catch block with single try block?
Say Big yes, below is the syntax -

12. Can you draw a Exception Hierarchy?
You can took help from our previous answer of question no 5 or Exception Tutorial.

14. What is difference between ClassNotFoundException and NoClassDefFoundError?
This is one of the popular java interview question, like balancing parenthesis, Well both are the sub-class of java.lang.Throwable.
The ClassNotFoundException is a checked exception and thrown when an application tries to load a class through it's string name using any of these methods and class definition not found.
The NoClassDefFoundError is a sub-class of java.lang.Error, that means NoClassDefFoundError is unchecked exception, and thrown when java virtual machine tries to load a class definition but no definition of class could found. Here, I have listed completed differences between them ClassNotFoundException vs NoClassDefFoundError with practical example must read.
15. How to handled exception in java?
To handle an exception, java provide three different exception handling keywords and those are - try,catch, and finally with the help of these keywords you can write an exception handler. You can find the complete details about the exception handling keywords at here.
16. What will be the output of below program?
17. Can you write a program to generate StackOverFlowException
Although StackOverFlowException is a sub-class of java.lang.Error, but you can create code to generate this exception you can use recursive method with never ending process which will generate this exception, below is the syntax to generate StackOverFlowException -

19. What is ArrayIndexOutOfBoundsException and how to prevent this error.
This is a sub-class of java.lang.RuntimeException exception and thrown to indicate, that the array has been accessed with illegal index, might be with any negative value or greater than or equal to the size of an array.
For example if array is initialized with int[]myArray = new int[4], and accessing through myArray[4] will throws an ArrayIndexOutOfBoundExcepiont, because array index is started with 0, so the last element from the above array can be accessed with myArray[3].
20. Can we throw Object instead of any exception
No you cannot throw Object instead of any exception, You can throw any instance of java.lang.Throwable

That's it, these 20 questions and Exception Tutorial will helps you to give the correct answer of any exception related interview questions.

Sponsored Links
Posted by javamakeuse at 11:51 AM