We have already done the setup of hive in our local machine with the help of my previous article, hive installation and now time to start with the hello world implementation of hadoop in hive, which is also known as word count in hive :)
In this post, I am going to show you an example of word count program using hive, although we have already done the same using map reduce program here at word count in map reduce tutorial.

Input sample data:
This is my first hive tutorial, which is known as hello world program in big data , big data technologies are now on demand. 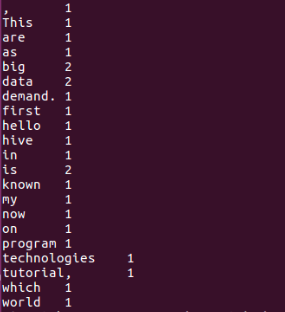 To achieve the above one, I am going to give you a very short and simple query unlike many lines of code while doing with map reduce :)

Instead of directly executing the complete query, I'm breaking them in a step by step, so that it will help easy to read as well as easy understand, of course at the end you will find a complete query to full fill your needs.

Step 2. Load data from the sample file
Syntax:
Ok, data is inserted into the hive table, now time to analyse how we can count..

Step 4. Use table generation udf
Now time to return multiple row from the above array of string, and for that we have built in table generation UDTF explode function.
Syntax:
The output of the above explode with split function is

Step 5. Final step
Ok,Ok too late, let's put it all together and see the result
Syntax:
Or alternative one
And below is the final output.

That's it. Don't forget to provide your valuable feedback.
Sponsored Links
Posted by javamakeuse at 11:24 AM